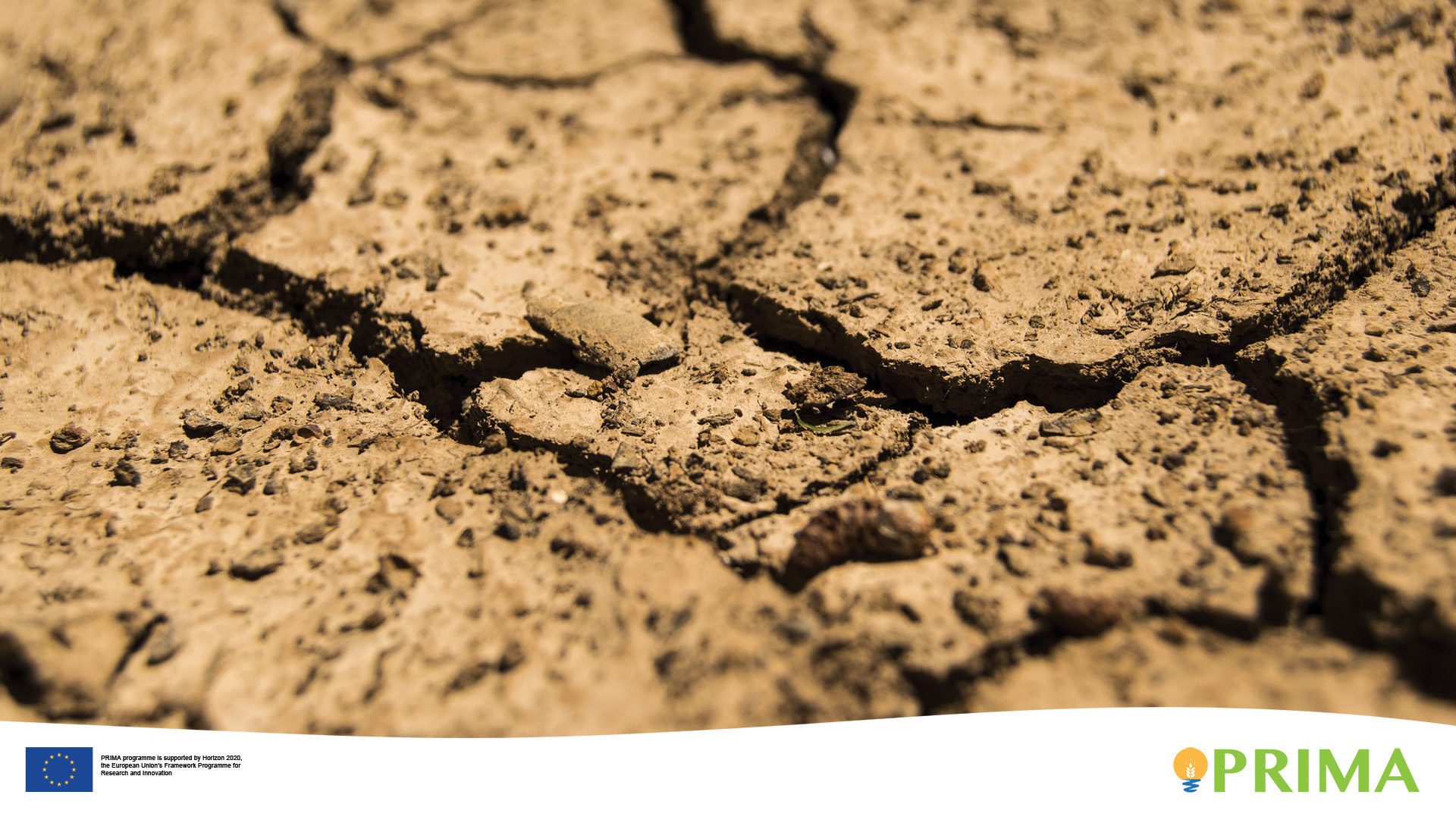 Drought, the silent enemy of the  Mediterranean

Looking for solutions to tackle water scarcity in agriculture

Where there is no water, there is no life. Only silence. The earth cracks, and the desert advances. The lagoons dry up, and migratory birds pass by. The reservoirs run out of reserves. Drought is destroying the livelihoods of the local inhabitants, and children are no longer heard. Desolate landscapes are gaining ground in the Mediterranean.

The images of olive trees dying of thirst in Agadir, in southwest Morocco, have remained in the collective unconscious. It is one of the devastating effects of climate change. Science is working at full speed to find solutions, adapted to the socio-economic reality of the Mediterranean region, based on small farms, very different from other arid areas of the world such as California or Australia. What is happening in the Mediterranean is the advance guard of what is to come, progressively, throughout Europe. The area is, therefore, a testbed for the entire continent.

Harsher drought than ever

Drought is not a new phenomenon, but the climate crisis has accelerated it to threaten both sides of the Mare Nostrum. Because of climate change, rising temperatures and decreasing precipitation, the frequency and severity of the drought have increased. The Intergovernmental Panel on Climate Change (IPCC), the United Nations body for assessing the science related to climate change, warns in its latest report that the Mediterranean is one of the areas where climate change is advancing the most. Warming has already reached 1.5 degrees Celsius in the region compared to pre-industrial levels, while globally, it is 1.1 degrees Celsius. In other words, it is advancing 20% faster. And droughts have become more frequent.

This winter has proven it. Persistent rain deficits in Mediterranean regions have led to alarming droughts. We see soil water content below the seasonal average and irrigation reservoirs well below capacity; grasslands and crops such as wheat and barley have been severely harmed. This year, rainfall has been 64% less than average in Morocco, leaving farmers facing the worst drought in the last 30 years and forcing the government to hike grain imports and subsidies. And the seasonal forecast up to May points to warmer and likely drier than average conditions in the region, which means an increased risk of harm to crop growth conditions during the spring and summer.

The European Union’s “A Soil Deal for Europe” makes all sense in this context. It is one of the EU Missions, a novelty of the Horizon Europe research and innovation programme for 2021-2027, a new way to bring concrete solutions to some of our most significant challenges. The main goal of this route map is to lead the transition towards healthy soils by 2030. It is included among the objectives to reduce desertification and prevent soil erosion, which are two critical factors in the Mediterranean area.

Moreover, Spain, France, Italy, Malta, Portugal, Algeria, Libya, Morocco, Mauritania and Tunisia have recently adopted the “Valencia Declaration”, which will result in a joint action plan to deal with the consequences of climate change on the water resources of the region. They aim at identifying concrete solutions in the integrated management of hydrographic basins, technological developments for desalination and reuse, new irrigation systems and improvement of the public infrastructure network.

How can we adapt to and mitigate the effects of droughts? PRIMA works on different lines of action to meet this challenge. On the one hand, it is necessary to preserve the soil, which suffers from an advanced state of erosion in the Mediterranean. Some of the PRIMA funded projects, such as CAMA, work on this line of action by trying to reduce the risk of soil quality degradation. One of the critical factors of conservation agriculture is a cropping system that covers the soil surface with crop residues to avoid humidity evaporation.

On the other hand, it is also essential to develop sustainable farming practices to tackle the drought problem, considering that almost 75% of fresh water is used for agricultural purposes. A more resilient approach is needed, reducing or adapting water resources.

Here it comes SUPROMED (Sustainable Production in Water Limited Environments of Mediterranean Agro-ecosystem), an R&I project co-funded by PRIMA, which aims to enhance Mediterranean farming systems’ economic and environmental sustainability through more efficient management of water, energy and fertilisers. Partnering with ten organisations from Spain, France, Greece, Lebanon and Tunisia, the project will provide a holistic water management system resilient to climate change. In detail, what is going to be delivered is an end-user technology platform specially designed to smartly advise farmers in the efficient water management of Mediterranean cropping.

To this aim, SUPROMED will integrate a validated set of scientific models and tools in an online platform to increase the production and income of farms through a reduction and more efficient use of water, and other inputs such as energy and fertilisers, while decreasing the impact on the environment. “It is all about giving farmers a set of scientific data to help in the decision making about the management of resources via an online platform. This platform is specifically designed for them and is easy to use”, says Alfonso Domínguez Padilla, Professor at the School of Agricultural Engineering and Forestry at the University of Castilla-La Mancha (UCLM) and the coordinator of this project.

This user-friendly technological platform improves the profitability of farms in the most challenging conditions and guarantees the future of farming activities. Using a cell phone, tablet or personal computer, small producers only have to geolocate their plot on Google Earth and select the crop, sowing date and texture and helpful soil depth, among other variables. The platform, connected to weather stations and satellite data, provides valuable information for programming irrigation “without going overboard or falling short in water use,” the researcher explains.

Therefore, SUPROMED democratises access to data. For example, thanks to predictive meteorological models and drought forecast tools, the platform informs whether the spring will be wet or dry, which helps farmers diversify risks during the planting season. Not only does it help to improve the efficient use of water for irrigation, but it also allows them to choose the varieties to sow according to these variables. “Our end-user platform is a handy tool for implementing appropriate mitigation measures to reduce negative impacts of droughts, through an adequate water resource management”, Alfonso Domínguez adds.

In addition to reducing the water footprint of agriculture and farming, the platform makes it possible to optimise fertilisers and reduce the carbon footprint by introducing photovoltaic energy. A holistic approach system that has been successfully tested in three large demonstration areas in Albacete (Spain), Lebanon (Bekaa Valley) and Tunisia (Sidi Bouzid region).

In Bekaa Valley, Lebanon’s most important farming region, “SUPROMED has implemented a demo site of almost 22,000 ha, where wheat, potato, onion, corn, peach and vineyard are grown. Researchers and farmers are working together to test the platform and assess the results”, explains Fadi Karam, Professor on Climatology and Agrometeorology at the Faculty of Agronomy of the Lebanese University.

In this hand-in-hand relationship, farmers provide researchers with their experience and environment knowledge, while researchers supply the decision support system and deploy an ambitious training program. Finishing now the testing stage, SUPROMED has already attracted the interest of private companies in other farming areas in the United States and South America. Professor Domínguez assures this innovative solution will remain an open and free system, although they are available to subscription models and agreements with specialised companies.

Collaboration with farmers is also a pivotal point in IRRIWELL. Antonio Díaz Espejo, the project coordinator, stresses that the digitalisation of agriculture generates some frustration among farmers due to the difficulty of understanding scientific data and using complex platforms. According to him, “researchers’ role is to help them interpret the data to make appropriate decisions for efficient use of water without reducing production and being economically sustainable: the investment in the equipment needed for the efficient irrigation has to be profitable”.

Similarly to SUPROMED, IRRIWELL also looks for minimising water consumption in agriculture. Díaz Espejo, a researcher at the Instituto de Recursos Naturales y Agrobiología de Sevilla from the Consejo Superior de Investigaciones Científicas (CSIC), in Spain, explains that this project funded by PRIMA uses a methodology based on plant physiology. As we all know, water plays a crucial role in plant life. Photosynthesis requires plants to obtain CO2 from the atmosphere, but at the same time, they are exposed to a loss of water and, therefore, to the threat of dehydration. “This is the plants’ dilemma,” he says, “how much water are plants willing to lose to obtain the carbon they need to grow?”

Using low-cost sensors, the flow of water vapour can be measured, and the soil-plant relationship regulated. It allows precision irrigation with a controlled water deficit without affecting production. Growers save on fertiliser and energy. The project is tested on olive crops in Morocco and Tunisia, lemon trees in Spain, peach trees in France, and apple trees in Germany.

Scientists warn about the urgent need to address climate change. There is no single solution to tackle the effects of droughts in agriculture. A combination of practices may be needed: promoting conservation agriculture to improve soil quality and developing low-cost technology as decision support systems to help save water, as well as working on the biological approach by selecting the most drought-resistant varieties.

Agriculture is fundamental as an economic and social activity and is at risk because of climate change. Increased droughts are a real threat and can trigger migration. But, according to the coordinator of SUPROMED, “agriculture cannot disappear because we depend on it to be able to feed ourselves, so the way forward is to achieve economic and environmental sustainability for farming crops.”

NAVIGATION PRIMA / Projects / Drought, the silent enemy of the  Mediterranean