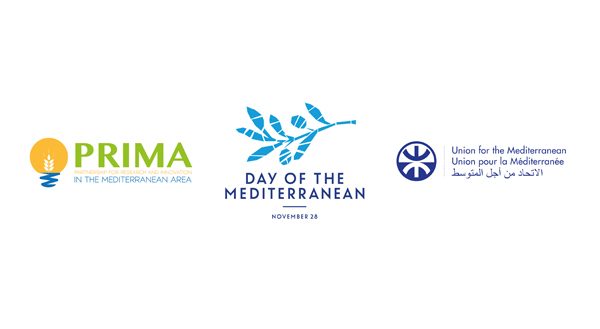 Celebrating the Day of the Mediterranean: Over 200 researchers and experts to participate in PRIMA webinar on Med Diet and Sustainability

Celebrating the Day of the Mediterranean:
Over 200 researchers and experts participate in
PRIMA webinar on Med diet and Sustainability
PRIMA to fund 11 projects with 32 million Euros in
Section 1 this year
On the occasion of Mediterranean Day, Partnership for Research and
Innovation in the Mediterranean Area (PRIMA) has organized a webinar
on the challenges and opportunities of the Med diet
Barcelona, 26th of November 2021. Yesterday, representatives from the
European Commission (EC), the World Health Organization (WHO), the Food
and Agriculture Organization of the United Nations (FAO), the Union for the
Mediterranean (UfM) and PRIMA have discussed the importance of the
Mediterranean diet to fight increased obesity in the region.
Discussions have taken place during the webinar “The Future of Sustainable
Mediterranean Diet: Challenges, Opportunities and Actions” organized on
the first-ever Mediterranean Day.
This event has provided an opportunity to present the importance of the
Mediterranean diet at different perspectives (health, environment, socioeconomic and cultural). With welcome and inspirational talks from the
organizers, keynote presenters have focused on identifying the key enablers,
drivers as well as obstacles against shifting towards this eating pattern, trying
to answer two basic questions of the day: How and Why towards Mediterranean
diet. The webinar has highlighted that many chronic and non-communicable
diseases (such as cancer, diabetes, cardiovascular and respiratory diseases) are
emerging from being overweight and obesity as one of the causes. The high
number of obese European preschool children is one example.
The welcoming speeches were held by Professor Angelo Riccaboni, Chair of
PRIMA, as well as Isidro Gonzalez, Deputy Secretary-General of UfM, and Karen
Fabbri, Deputy Head of Bioeconomy in the Food Systems Unit of the European
Commission.
“PRIMA has always been playing a very active role in social change and Med
diet, and a major initiative that has funded 140 projects so far”, Angelo
Riccaboni explained. Isidro Gonzalez has expressed the need for more
innovation and cooperation to enhance climate change, energy and health,
especially regarding the blue food, because of the employment creation
potential for the Southern shore of the Mediterranean.
From the European Commission, Karen Fabbri has invited researchers to
apply to Horizon Europe programme under The Green Deal and the Farm to
Fork strategy. Both Ayoub Al-Jawaldeh, Regional Advisor Nutrition for the
Eastern Mediterranean at WHO, and José Valls Bedeau, Policy Officer of the
Food Systems and Food Safety division at FAO, have held keynote speeches
about sustainable Mediterranean Diet.
Ayoub Al-Jawaldeh highlighted that almost half of the population in Northern
and Middle Eastern Mediterranean countries are overweight. From his side,
José Valls added that more than 3 billion people in the world cannot afford a
healthy diet, while 14% of the produced food globally is wasted. “Improving
food systems mean improving the delivery of healthy diets, reducing the
environmental impact and making them more accessible, affordable, equitable
and safe”, he said.
Afterwards, the PRIMA actions towards a sustainable Mediterranean diet have
been discussed. Octavi Quintana, Executive Director of PRIMA, and Mohamed
Wageih, Agrofood Project Officer at PRIMA, have shared their thoughts about
the set of values, lifestyle and a social-cultural approach behind the Med diet.
They elaborated how PRIMA could support the Med diet by funding a research
projects that encourages healthy and sustainable practices in the region.
An interactive session moderated by Omar Amawi, Deputy Director of PRIMA,
has witnessed participation from over 100. The audiences of the webinar
interacted through replying on questions abouttheir awareness and knowledge
about the Med diet.
In the Roundtable that followed, presentations of different case studies of
sustainable Med diet in the region, moderated by Sandro Dernini, from IFMed
and CIHEAM-Bari was held. He highlighted the value of the Med Diet 4.0
model. Many cases from Lebanon, Spain, Maghreb and Portugal have been
presented by excellent researchers in the region.
This session has shed the light on various countries’ achievements towards
a sustainable Mediterranean diet. The event outcome will feed the PRIMA future
calls and topics preparatory process.
Luis Serra Majem, from Universidad de Las Palmas de Gran Canaria, has
detailed the last achievements: improvement of research, valorisation of Med
diet as a cultural and culinary pattern, and boosting the sustainability
concept.
Nahla Hwalla, from the American University of Beirut, talked about the nutrition
transition and low adherence to Med diet because of the increasing shift to the
Western diet. “We have to retrieve the Mediterranean diet by routine
monitoring of food consumption and with a strategical road map participated
by all drivers of food systems for each country”.
Anna Maria Gomes, from the Catholic University of Portugal, explained the
Keywords for achieving the Med diet are technology and innovation, co-design
and a multi-stakeholders approach.
“The lack of awareness and high consumption of food high in sugar and fat are
the biggest challenges”, Rekia Belahsen, from Chouaib Doukkali University,
claimed from the Maghreb.
Last but not least, the results of PRIMA 2021 Section 1 have been announced by
Mohamed El Shinawi, Co-chair of PRIMA. With a total budget of 32 million
euros, eleven new projects have been chosen from which three projects tackle
the Med diet.

Section 2 Results are out!

NAVIGATION PRIMA / News / Celebrating the Day of the Mediterranean: Over 200 researchers and experts to participate in PRIMA webinar on Med Diet and Sustainability